I quite enjoyed The Guided Fate: Paradox, in spite of a number of flaws I noted in my review at the time, so I was pleased when Nippon Ichi Software announced plans to follow up with The Awakened Fate: Ultimatum. Now that I’ve spent a lot of time with the result of that effort, though, I must say it didn’t quite live up to my expectations.

The Awakened Fate is a sequel only indirectly. You’re once again introduced to the Netherworld and Celestia, two regions engaged in a longstanding conflict. The Guided Fate offered the same setup, but in this case the heroes and villains you meet are completely different. There are multiple versions of Celestia and the Netherworld, you soon discover, even if there is only one Earth. 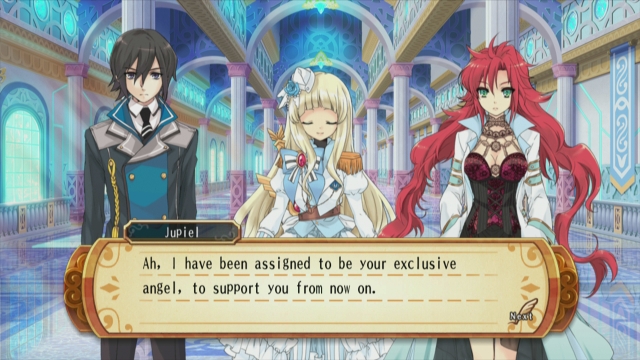 The proper story begins as a human lad named Shin Kamikaze is headed home from school after napping on its rooftop (how very anime of him!). As he heads through a bad part of town, winged demons suddenly descend from the sky and stab him through the chest with a sword. He’s in rough shape, but then a beautiful angel named Jupiel Soraumi (“Jupey” for short) beats back the scoundrels and takes the mortally wounded protagonist with her to the sky. He awakens in the heavenly city of Celestia, in a laboratory managed by a mysterious redhead named Ariael Agarie who announces that she has saved his life by planting a Fate crystal in his chest.

Shin soon learns that he is now God. As such, he’s expected to do battle with the demons that effortlessly overwhelmed him just a little bit ago. The angels are fighting a losing battle against those darker forces, and Shin is the secret weapon that might allow them to turn the tide of the war. The glaring issue here is that Shin is presently quite weak, and also prone to wallowing in self-pity. He’s still getting used to the idea that he should be dead right now, after all, and he certainly doesn’t appreciate being called to participate in a supernatural war that seems unreal to him.

Like most NIS America titles, The Awakened Fate tells this outlandish story with a huge helping of voiced dialogue and character portraits. You’re used to the style by now, if you’ve played much of anything from the studio. The English actors all do a great job, and there’s actually very little dialogue in the main campaign that isn’t voiced. If you prefer, you can easily switch to the original Japanese audio, while keeping the generally excellent English text in place. 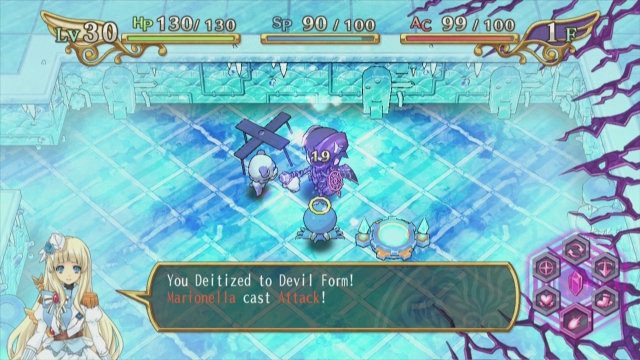 The core gameplay is basic and repetitive, falling once again within the “roguelike” subgenre. Plot twists occur mostly between dungeon romps, with occasional exceptions as brief dialogue snippets move the narrative forward. You buy, sell, or customize equipment back in town, make adjustments to your character (more on that in a bit), and then venture into the next dungeon to kick butt. Layouts are randomized and uninteresting, with extremely drab artwork. The Guided Fate introduced a variety of interesting settings. Though not complex, they offered variety. The bulk of the dungeons here occupy the “Spirit World,” a much less exciting place than the name suggests.

As you run around the bland dungeons, you’ll find that each movement or item use counts as a turn. Enemies are bound by the same rules, so you can take your time and think things through if it all gets a bit overwhelming at times. Your wandering eventually fills out a map, and it’s easy to advance from one floor to another on the way to the exit. As you progress, you could stumble across traps that impart status ailments or damage, or occasionally even buffs that actually help you out for a few turns. Gradually, you drain the meter that lets you keep exploring, and you can either refill it with items or use an item to warp back to town.

The Awakened Fate differs from its predecessor by focusing on a new side of things: alignment. As you explore, you can press L2 or R2 and assume an angelic or demonic state that imbues you with dark or light power. All of your enemies fall in one alignment or the other (even, amusingly, when the plot finds you invading demon bases), and you fare better if you battle them while wielding the opposite power. The problem is that even taking a step or swinging your sword in your enhanced state drains your SP meter, so you must limit your time in either guise. Balancing it all is easy enough but soon grows tiresome, and yet you can’t afford not to pay attention because some enemies have projectile attacks or move quickly. Take a couple of overly hasty turns and you could wind up dead, which is a potential problem because–this being a roguelike–all of your equipment is lost, even if you spent hours powering it up to its current state. 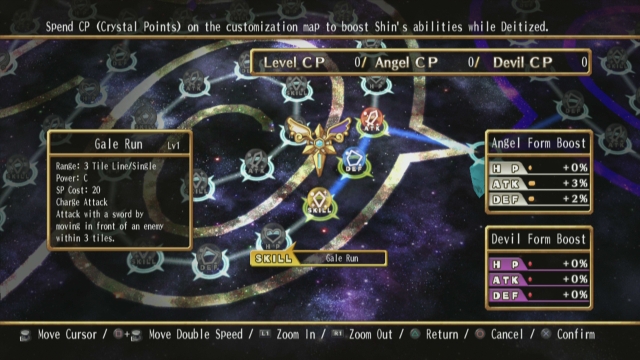 The good news is that you get to keep any levels you gain, even when things otherwise fall apart. And honestly, reasonable preparation will ensure that you never have to bid farewell to anything important. Each level you gain awards you a point you can spend customizing Shin with abilities that improve either his angelic or demonic form. Decisions you make as the plot progresses also generate points. From there, abilities and enhancements to ATK, DEF and HP are unlocked as you see fit, using a branching chart reminiscent of the Sphere Grid in Final Fantasy X. You might recall that The Guided Fate employed a substantially more complex method for character upgrades, and I appreciated the simplicity here quite a bit. Some players will doubtless miss the creative setup from before, which lent the player a greater sense of accomplishment, but I thought the streamlined approach here worked just fine.

Unfortunately, The Awakened Fate is sometimes a little too simple for its own good. In addition to the disappointing dungeons I already mentioned, the boss encounters are both infrequent and dull. There were some quite memorable battles in The Guided Fate, but most fights here come down to you standing next to your foe and swapping attacks while occasionally using a restorative item… if you even need to work that hard. There are only a few such battles in the whole game, as well. Most dungeons end with you simply teleporting back to town.

Whether because of limited resources or a desire to make The Awakened Fate: Ultimatum accessible to a wider audience, its developers have stripped away some of what made its predecessor memorable. The resulting experience is certainly playable and at times can be quite satisfying, but elsewhere it feels like a half-hearted reimagining rather than a triumphant sequel. If you haven’t yet tried the series yet, you’re better off starting with The Guided Fate: Paradox first even though it is more complex. Then you can stick around for this underwhelming next chapter if you’re anxious for still more fun in Celestia and the Netherworld.