Samurai Warriors 4-II is an action hack and slash game developed by Omega Force and published by Tecmo Koei. Even though the game is a sequel to Samurai Warriors 4, it has been described as a different focus on the same game rather than a direct continuation. Before this game, the only Dynasty Warriors style game that I had played was Devil Kings (Sengoku Basara) on PS2. I decided to go back and try Dynasty Warriors 8 Xtreme Legends in order to have a newer game to compare it to.

Samurai Warriors 4-II has a character-driven story that takes place during the Sengoku period of ancient Japan. Some of the character names are borrowed from that time period and the overall story is focused mainly on character relationships on different sides of the battlefield. At times the game feels lighthearted to an extent, but it all depends on the campaign that is chosen. The game starts out with five available campaigns and there are a total of eight unlockable campaigns that you gain from beating the default campaigns.

Each campaign assigns you with a primary character and you can choose a partner. The story mode can be played in single player mode or two-player through network play or local play (split-screen). Normally, I can’t stand single player with an AI partner, but it really works out well in Samurai Warriors. You are able to freely switch between your characters with the tap of a button. Your partner often stays separate from your controlled character but you both might meet up during objects. The most common objectives are fighting through waves of enemy soldiers in order to defeat an enemy general or defend your army. While out on the battlefield, your AI partner will often run toward the next objective area, so you can quickly switch to your partner to get to the next objective point instead of having to make a long tread across the battlefields to get there. This helps out greatly for a Dynasty Warriors-style game to cut down on traversing through the whole field to get to each destination point. It’s much like a fast travel.

It’s amazing to me that Samurai Warriors 4-II can hold up so well during all the flashiness and enemies that can appear on the screen at one time. The game doesn’t seem to have any noticeable slowdown or framerate drops on the screen no matter how intense the action gets. While playing Dynasty Warriors 8 on PS4 shortly after playing Samurai Warriors, I noticed quite of bit of framerate drops and slowdown, but I don’t notice any of this in Samurai Warriors 4-II. Samurai Warriors only has Japanese voicing with English subtitles as an audio option. This really hurts it during battles since I don’t have time to read what each character is saying during intense fights, so I lose out on some character interaction. In Dynasty Warriors 8, the game has an English dub which helped it out greatly for character speech and overall immersion during battles.

The gameplay can get repetitive with constant hack and slash but the focus on hack and slash is honestly why you would play these types of games, so it’s an expected flaw for this type of game if you ask me. Each character has a horse that allows them to get through the battlefields faster like in DW8 and just like in that game I would sometimes have the horse run all sorts of different directions instead of stopping in front of me so I could get on it. It’s very annoying to whistle for a horse and have it run back and forth instead of stopping in front of your character.

The overall graphics for the game look about the same as a later generation PS3 game, but the game is super smooth in movement. The controls are quite fluid as well – just about each button has some sort of function. The enemy AI for soldiers is your usual mindless type enemy that you can get free hits on but they can get the best of you in crowds if you don’t watch it. Higher level soldiers can be a force to be reckoned with thanks to their special attacks, but if you run into a battle with them with a full rage meter and spirit gauge, there isn’t a thing they can do. 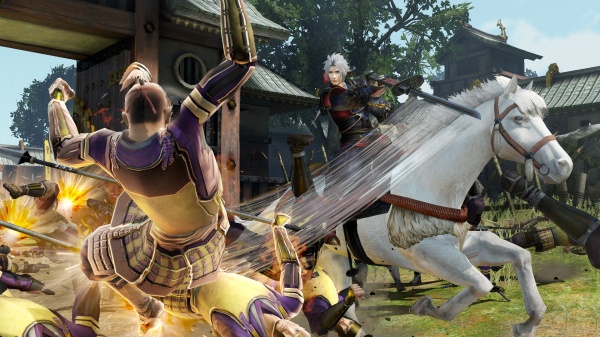 Besides the usual leveling up system, there is a skill tree where you can strengthen your character in-between battles. You can use tomes to buy attribute upgrades and equippable skills. Tomes are dropped from defeated enemies. Weapons can be combined to strengthen their attributes. At the end of each stage, you’ll get plenty of new weapons that you can use or combine with current weapons. Horses can also be strengthened as well.

There is a story mode that allows you to experience the story of each character party and there is a free mode, survival mode, and dojo mode. Free mode allows you to play any campaign stage with any of the characters on the roster. Survival mode takes you through several floors of constant enemies. Dojo mode allows you to create your own fighter. I had a great deal of fun with Samurai Warriors 4-II and would highly recommend it to fans of Dynasty Warriors style gameplay. It seems more character driven with a lighter focus on overall plot when compared to DW8, but the gameplay is vastly superior to DW8 on PS4 thanks to the stable framerate.