You’re going to see other reviews that bring up this salient point about Lost Dimension. Keep your friends close, and your enemies closer. It’s like the team at Furyu Corporation made this the mantra of their game from start to finish. Always keep this thought in your mind, I know I did, and I still managed to screw it up. I thought Mana was going to betray me. She had that fake British accent going from the get-go, should have tipped me off. Instead it was the damn doctor, the one person I counted on more than anyone else to get me through this game. Oh well. At least there’s a new game plus mode.

Lost Dimension is a tactical RPG that puts you in the shoes of Sho Kasugai, the reluctant leader of a group called S.E.A.L.E.D., which is too long an acronym that I totally forgot within minutes of starting the game. He and ten other team members have entered The Pillar, a construct that was devised by The End, a terrorist who is holding the world hostage. Each member of S.E.A.L.E.D. was chosen for their unique skills. Himeno has control over fire, Agito can teleport, Yoko commands the power of telepathy. The rub here, Sho, and his other team members have no memory of how they entered The Pillar, and The End has an ace up his sleeve, there’s a traitor amongst you, and he makes it very clear that they will betray you. So, your goal is to climb through the five strata of The Pillar, confront The End, and save The World, all without getting stabbed in the back. How will you accomplish that last bit? Sho’s just the man for the job.

Sho’s abilities of Vision allow him to hear the thoughts of his comrades, and through battle, can weed out who the traitor of each chapter may be. You’ll build camaraderie amongst your team members, but it will ultimately be used to identify who is the traitor in your midst. The game helps ease you into this by handing you the first traitor on a silver platter. This serves as a great intro, especially because the character in question is kind of a massive tool, had a very, Zap Brannigan quality to him. As you progress you’ll gain more abilities that allow you to delve even deeper into the thoughts of your teammates, hopefully preventing you from suffering a rather harsh betrayal.

Sho can read the thoughts of the team after every battle, so you’re encouraged to participate in as many as possible, which isn’t necessarily a bad thing because the combat is actually a rather complex and deep system that ultimately proves to be pretty fun. You’re given six slots in every battle, Sho is a required member so it’s more like five, and after each battle he will hear the thoughts of those that were in battle. So if you don’t like using a particular party member (looking at you Marco), then it’s possible to completely miss the traitor and condemn an innocent party member. So the actual combat is separated by turns, you’ll spend your turn moving characters into position and setting up their attacks. Each character’s movement range varies. Nagi can levitate, so she can move farther, Agito, with his teleportation can also move quite far. Placement of your movements is critical because any character within range can offer an assist attack after your character makes a move. This means it’s possible to take down large enemies in one turn, provided you work as a team. This also contributes to your end of round score, which will grant a bonus if you do well enough. You can also hurt your score by allowing your characters to die, or enter a ‘berserk’ state, which occurs if their mental state starts to degrade too much, either from using too many abilities, or taking too much damage. 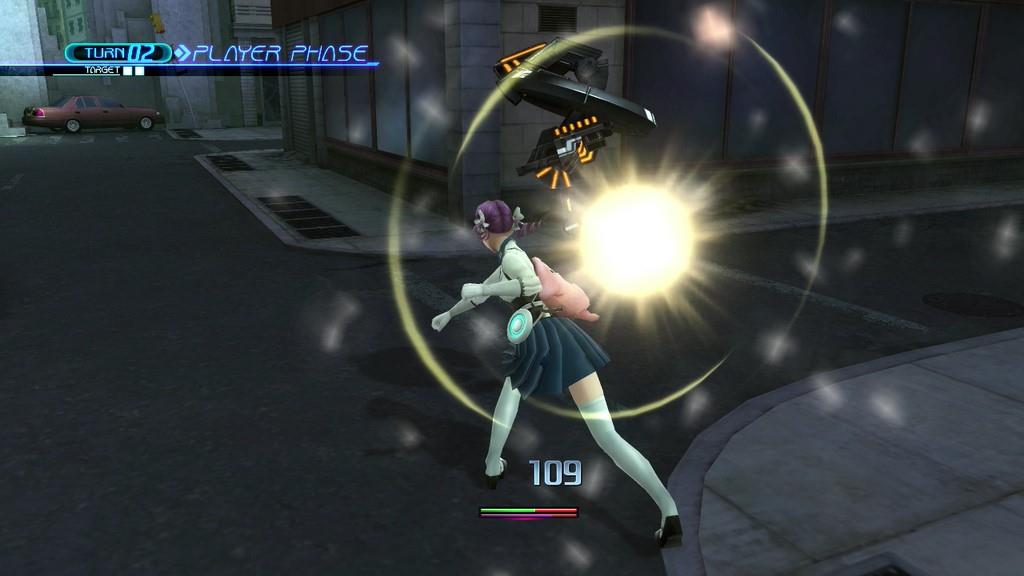 Completing battles will give you your standard experience points, and sometimes ‘Gift Points.’ These points can also be earned from leveling up and are the keys to expanding your skills. The skill trees for each character can be fleshed out with Gift Points and can be used to shape your characters into a unique niche that you might find enjoyable. Some skills require a Materia, which is dropped after you ‘erase’ a potential traitor. The Materia will also transfer over the unlocked skills of an erased character, giving them more flexibility in battle. This system allows for some pretty specific paths and is key when fighting The End.

Lost Dimension is also big on replay. The main campaign is rather short, but odds are that you messed up the first time around and picked the wrong person as a traitor. Well thankfully when your journey comes to a shocking end, you can carry over in to a new game with the skills and powers you unlocked previously. It makes going through the game multiple times a bit of a breeze and cuts down on subsequent playthroughs, which is definitely appreciated. 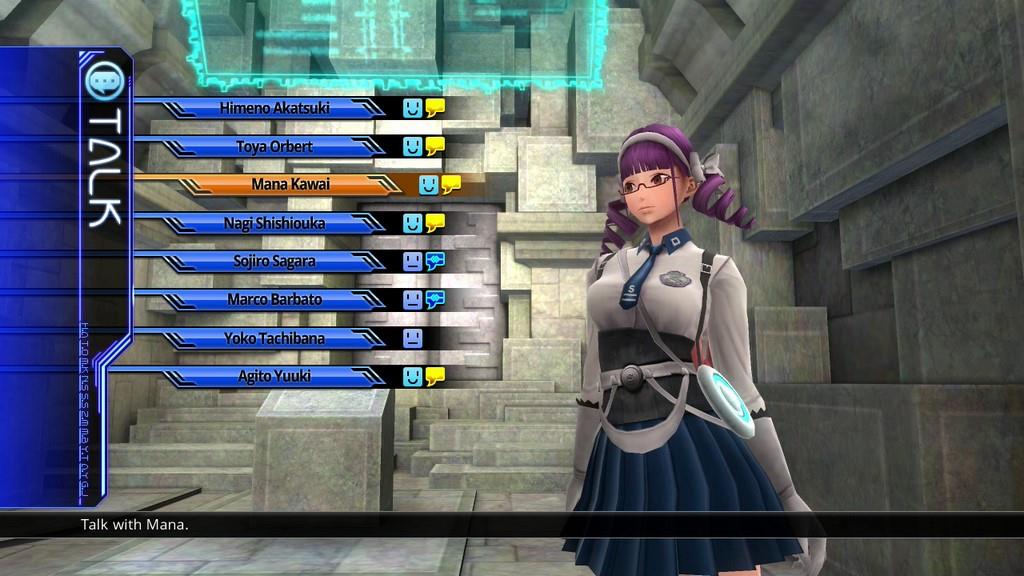 The visuals of Lost Dimension looks like a pretty late-era PS2 title. The art style has some less than inspiring characters, and the locales can be a bit bland on the color pallette, but it’s a sharp looking game, if slightly unimpressive. The audio is kind of a mixed bag as well, the music has a lot of repeating tracks, and none are particularly bad, but the menu music starts to grate after a while when you’re navigating through menus trying to equip things or chat up with your party members. The voice acting is kind of all over the place as well. You’ve got some characters that really ham it up, while others sound somewhat believable. Then there’s Mana and her badly faked British accent which gets old kind of fast. And the dialogue is full of your typical tropes, but one thing that really started to grate was the whole attitude of ‘hey, whoever’s the traitor, don’t stab me in the back in the middle of battle.’ At first it’s a nice tongue-in-cheek way of pushing that inevitability, but since it’s kind of a self-fulfilling prophecy, I’d rather it not be hammered so hard. I get that my team works great when they’re all in sync, but that’s not going to change the fact that it is a plot device and it will be used.

I liked Lost Dimension a lot more as I got deeper into the gameplay. The Vision system is a novel idea, and the combat shows a surprising amount of challenge and depth. I initially wrote some of the game off as too hard until I really thought about having my team actually work as a team. It’s surprising how well that worked, even though one of them was waiting to stab me in the back. The replay value is appreciated, especially since I screwed up my first time through and felt like I’d need to go through the game again to try and get it right. You might find yourself in the same boat, I thought I was a pretty good judge of character, but that shift eyed doctor got me in the end.

Like I said, keeping your friends close and your enemies closer could not be more apropos in Lost Dimension. The depth of this game makes it a pretty solid addition to the Vita library, even if it does come off a little heavy handed about some life lessons.