The uniquely named htoL#NiQ – The Firefly Diary is one of the most refreshing titles in recent years. It’s a Ghost Trick meets Dokuro puzzle game with a sprinkle of point and click gameplay. Beneath its cutesy first look, Firefly Diary hides a deep dark story with disturbing imagery not for the faint of heart.

After being awoken by a mysterious firefly, Mion a young girl with horns finds herself alone in a rundown room. She soon searches for a way out only with the guidance of two fireflies, passing through dilapidated remains of factories and research laboratories. The whole game is presented in an artsy way. All these hazardous environments give a feeling of dread and loneliness. 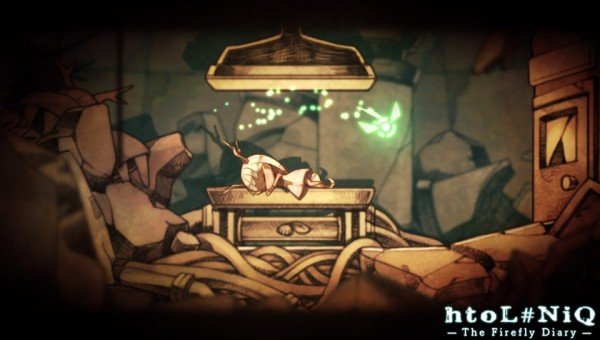 The story is told through a very limited amount of static images and optional memory fragments you might find on your journey. There is no text, no dialog, and no life bar, nothing that might take you out of the experience that is The Firefly Diary. Nothing in the game is spelled out, but it rewards the player for every moment spent with the game.

The memories you collect play out like a retro isometric game showing how events that led up to the games beginning transpired. The infrequent trips to Mion’s memories just serve as a short relief before you are flung back head-on into The Firefly Diary’s world. 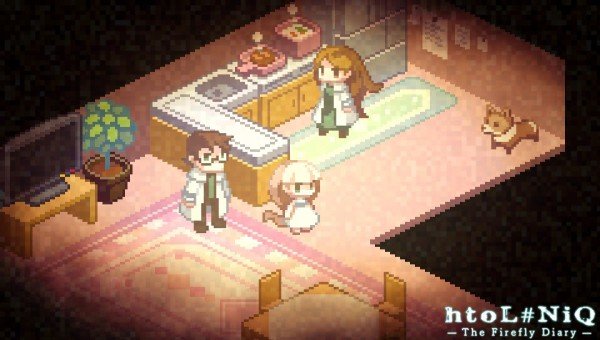 You control Lumen, a Firefly who guides you to the outside world. Wherever you move Lumen Mion will follow. The visuals are as much part of the presentation as they are a part of the gameplay. Everything in the world casts a shadow. As you move the firefly around so do the shadows. Manipulating shadows is an important way of interacting with the world. With the help of the Umbra, the shadow firefly, you can navigate through the shadow of the world and interact with objects far away from Mion.

With just these two simple concepts the game manages to deliver an astounding number of different puzzles. In one chapter you must use switches to traverse a system of conveyor belts, saws and crushing machines, all while using their shadows in the right moment to create a path. In another you receive an umbrella and must use winds from fans to fly up through an obstacle maze. And yet in another level you must use Lumen in order to make plants grow to bridge gaps and Umbra to tear them apart. And later you will use shooting plants to destroy enemies or guide Lumen through a maze while Mion in slowly approaching danger. Almost every puzzle I came across was cleverly designed and forced me to figure things out myself. 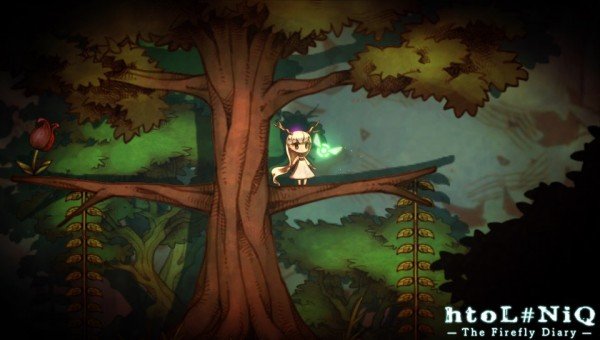 However puzzles can be quite challenging at times. Not only do they require out of box thinking but also precise timing and a lot of trial and error. This means that you will need to redo some of the sections over and over and over again just to succeed. Gamers looking for a challenge will definitely find one here. Despite its ridiculous difficulty at times, the game lets you decide on how difficult you want the puzzle to be. If you want to see more of the game you can try to collect all the hidden memory fragments which you really have to go out of your way to collect.

Sadly The Firefly Diary falls apart in one of the most important aspects of any game, the controls. The indirect control of Mion might have worked in slower games but here they make the game needlessly difficult. On paper you use the touch screen to move the firefly and the rear touchpad to control Umbra. However in reality controlling them is never precise as it needs to be. The majority of deaths will come from the unresponsive controls. You do have the option of using the analog stick to control the firefly which does allow you have a better view of the screen and give you a bit more precision, but it is still far from perfect. 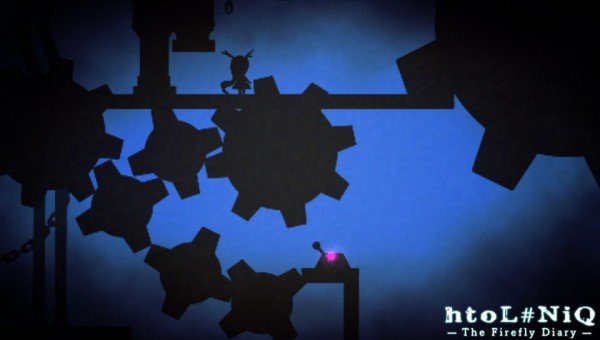 The game has four chapters and a fifth secret one which requires you to collect all the memory fragments in order to unlock. Persistent players will be able to see all what the game offers in around 10 hours and after that there is little incentive to go back and replay the game. Trophies are one great way to extend the playtime a few more hours. I generally ignore all trophies in games, however the ones in here serve as a way for players to see things they may have missed during their play, such as collecting hidden dolls, feeding a bird or even getting a glimpse of the moon.

The visuals are beautiful and fully immerse you in the atmosphere of The Firefly Diary. Despite its initial looks the game’s disturbing nature quickly rears its ugly head. Everything is out to kill Mion from bottomless pits, to machine saws looking for blood, to creepy shadow monsters wanting to consume you. You will traverse junkyards, factories and even dangerous forests. The memory segments also have a pixelated look giving players a nostalgic feeling. 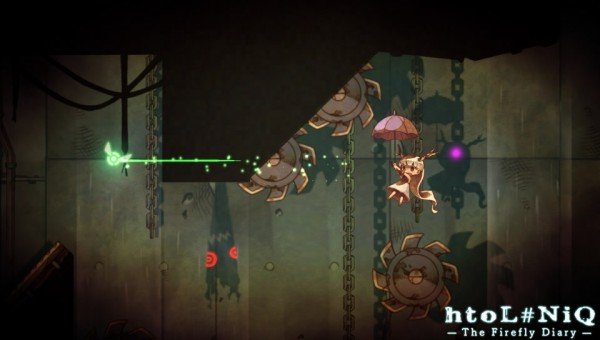 It’s sad to say but The Firefly Diary is a game only a few will be able to genuinely enjoy. The game is an amazing experience and one of the best puzzles games in the past decade, but only if you are able to get past some ridiculous difficulty spikes and terrible controls. People who want a cute and relaxing puzzle game won’t find it here, but those who are willing to put effort into it will be rewarded with a unique puzzle game.